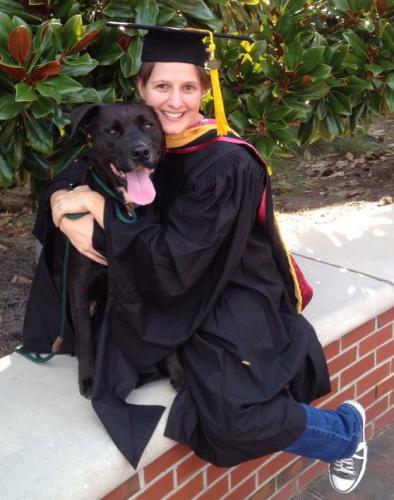 “I have always been driven by serving both animals and the humans that love them. After moving to Sacramento and working in a laboratory for a few months, I was eager to return to a leadership role with an organization dedicated to the improvement of animal welfare.” Enter the Sacramento SPCA and the newly created Animal Services Practice Manager position.  Hired in May of this year, Karalyn Aronow has an extensive background in animal welfare experience and a driving passion to establish the highest standards for both animal care and customer service.

As an undergrad at Florida State University on a pre-veterinary tract, Karalyn switched her major to Zoology and focused on large domestic animal and zoo welfare. She then then pursued two Master of Science degrees —one in Ecology & Evolution with a thesis focused on snake venom evolution and the other in Animal Behavior from UC Davis with an emphasis on applied animal welfare. Karalyn has worked in almost every facet of animal care and has held management positions in diverse organizations; she spent a number of years as the Barn Manager and Trainer for the Leon County Sheriff’s Office Mounted Posse. Before moving to Sacramento last September, Karalyn was serving as the Director of Charitable Services for a young pet-related nonprofit organization in Portland, Oregon.

Karalyn has found her dream job. She believes now is an exciting time to be a part of the Sacramento SPCA. Recently, she observed “at the Sacramento SPCA, seeing young families walk into our Adoption center looking for a new pet and guiding them towards the cat or dog that will best fit into their lifestyle is incredibly rewarding. I sincerely believe that the more we care for and give back to the human members of our communities, the better the quality of life will be for their pets.” This philosophy extends to her rescue dog, Taz.  Found on the side of a road during a biking trip, Karalyn thought she had stumbled on a baby black bear! He was in rough shape-he had over 70 ticks on him, every intestinal parasite known, and was heartworm positive.  Karalyn got him neutered and treated for his medical conditions then began the long journey towards socialization. Six years later and Taz is doing great. Reflecting on her experience with Taz, Karalyn muses “I consider finding him on the side of the road to be one of the luckiest moments of my life as I couldn’t imagine a better companion.”

Now settled in her new position, Karalyn has time to pursue some of her favorite outdoor activities like rock climbing, mountain biking, and downhill biking.