Jack’s Journey Celebrating one year with his new family 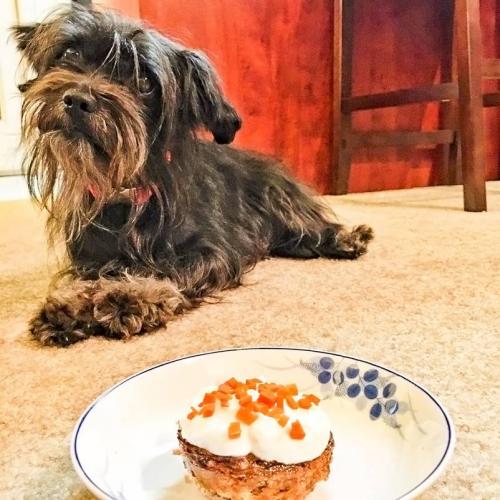 Meet Jack!  He is a six-year-old terrier mix who recently celebrated his one year anniversary with his new family.  Of course he celebrated in style – his family baked him a liver and ground beef with egg cake, topped with fresh Greek yogurt and carrots, which his family explains, “he wolfed down in about 12.5 seconds.”

You might be surprised to learn that Jack’s journey didn’t start off this dreamy.   He first arrived to the Sacramento SPCA in July 2015 when his previous family could no longer care for him.  To no one’s surprise, this vivacious and adorable character, then named “Oreo” was adopted right away.  Unfortunately, Jack found himself back in the care of the Sacramento SPCA just two and a half months later because the family did not have enough time for him.  Jack was back, but not for long – four days after returning to the adoption floor, Jack was adopted by his current family.

How could this happen to such an adorable animal, you ask?  The Sacramento SPCA is frequently told by surrendering families that they don’t have enough time or they can’t properly care for the animal.  Quite often, these explanations are accompanied by other contributing factors, such as behavior issues and training needs.  After receiving a letter from Jack’s new family three weeks later, it’s quite possible that his behavior played a factor.

We received the letter from Jack (in his voice), which explained, “You guys had told [my family] that I was adopted in July, but returned.  You didn’t say why.   Mom knew there had to be a reason – good, easy dogs don’t get returned when they’re this handsome (and I am quite good looking).”  The letter went on to explain the various behavior issues Jack and his family were working to resolve, including; poor house training, being territorial and his distaste for grooming.

Fortunately, Jack’s family combined time and training with love, patience and understanding to work through these obstacles.  One year later, his family explains in a recent e-mail, “He’s doing amazingly well and brings much joy and laughter to our lives every single day!”

We are elated to hear that Jack is thriving with his family, who now live in the Bay Area where he enjoys three walks per day and gourmet birthday treats.  With the right support, every family can enjoy a lifelong, positive relationship with their pet.   For more information and resources to assist with common behavioral problems or to sign up for behavior and training classes, visit www.sspca.org/behavior.