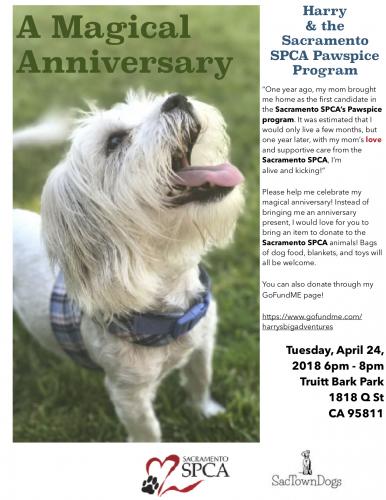 One year ago, Harry became the first candidate in the Sacramento SPCA’s Pawspice program for animals with terminal illnesses.

It was estimated that Harry might only live for a few months at most, but with his new mom’s love and support from the Sacramento SPCA, Harry is still living life to the fullest and celebrating his year anniversary!

Join us at Truitt Bark Park for a magical anniversary dog party for Harry! Cake, streamers, dog treats, you name it!
In lieu of gifts, Harry will be accepting donations to the Sacramento SPCA!

Back
This item appears in:
This post has been archived and may contain content that is out of date.